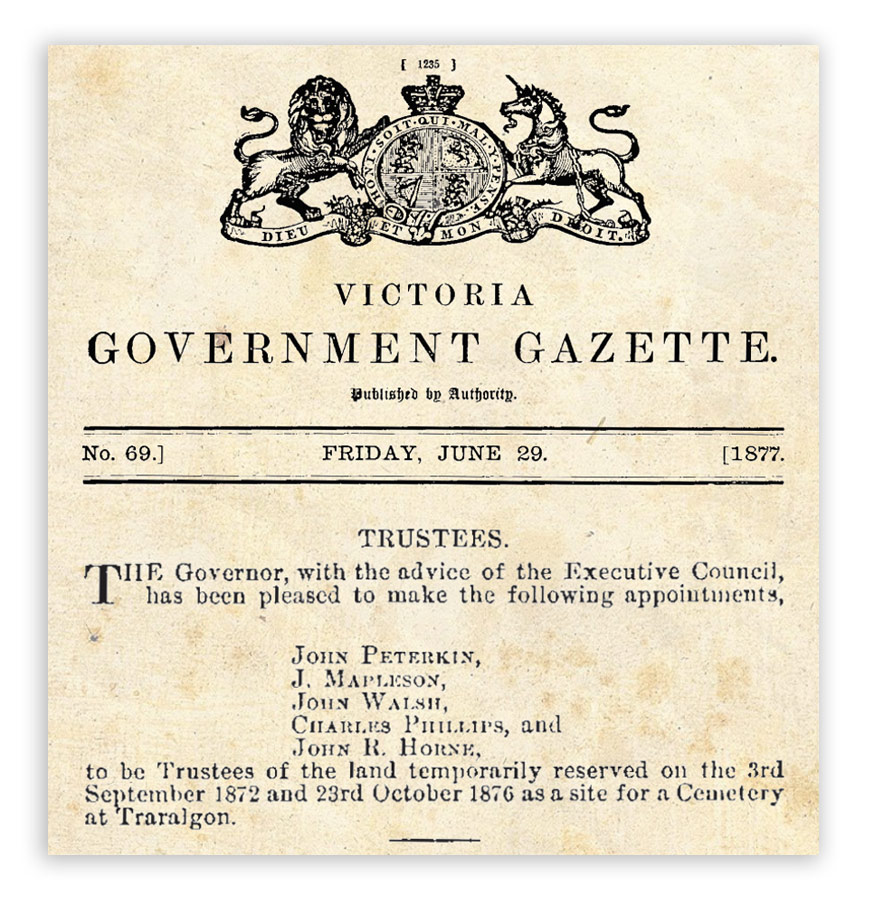 The first Traralgon cemetery was at the corner of Hotham and Princes Street in which several interments are recorded. Once the railway extended through Gippsland the cemetery was briefly moved to an area in Stockdale Road and then very soon after it was moved to a new site: “The Bluff” where the new town’s residents could see their homes from their place of forever resting peace. 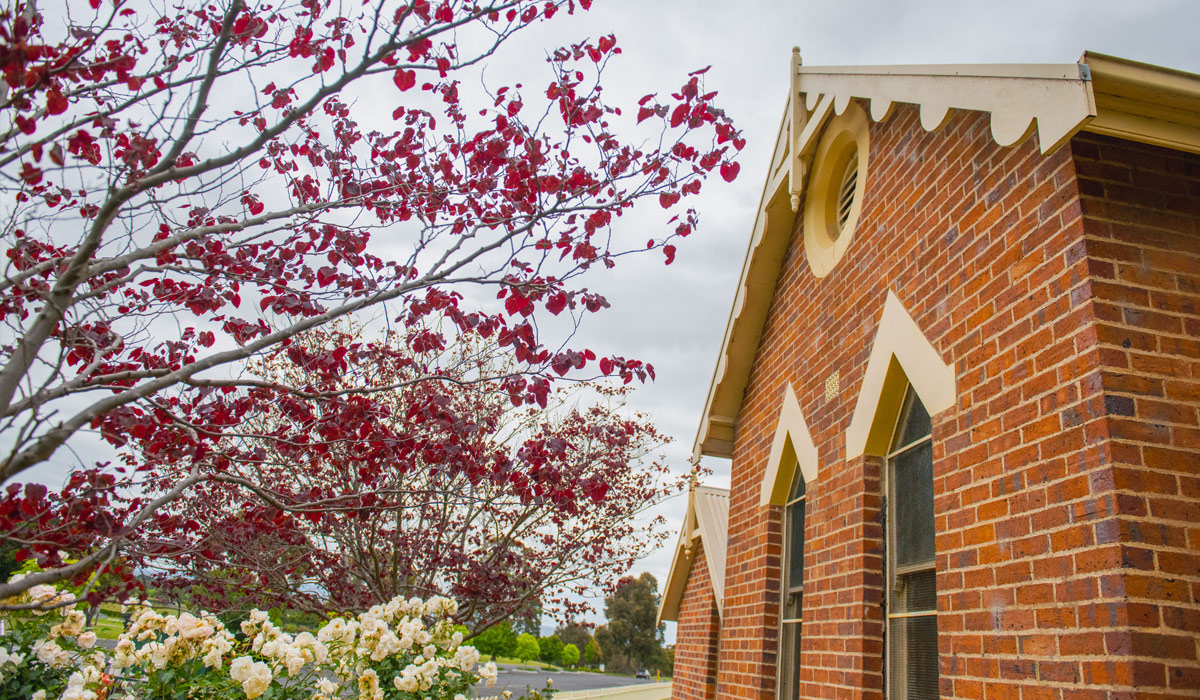 A building built for the purpose of providing clergy a place to quietly contemplate and enrobe in preparation to deliver their ceremony marking a life’s finality. An historic brick building of classic British architecture including gothic windows and a gabled roof that marks the start of the “Old Bluff” cemetery as it was gazetted in 1872, being the third cemetery site to be defined in the Traralgon area since European settlement. The Bluff overlooking the Latrobe river and was so named after the steep hill crest on which it stands and up which many funeral corteges of mourners struggled to ascend and lay their deceased to final rest.

In the late 1800’s the site’s road proved a difficult one to travel so a road easement was bought from Mr D. Campbell and Mr Copeland. The first trust members were gazetted and many towns folk rallied to develop the cemetery road and the very grounds upon which you now walk. Many are here sleeping in their resting places “in the soil over which they ruled and toiled…Their work stands around us for the benefit of those who follow”*

TRARALGON CEMETERIES. Sir, — With reference to your article on Traralgon Cemeteries, I may be allowed to add a few words. I have had occasion to examine a number of records bearing on the early history of Traralgon, and have noted some references to the cemetery which may be of interest.

The first ground formally set apart in Traralgon for burial purposes was a site of 10 acres in what was after-wards Traralgon Park. It was in that portion of it which is still occupied by Mr. J. D. Campbell, and the present road through the Park, which passes Mrs Cameron's property, goes very close to where it was situated. This site was reserved in the early sixties, and is shown as a Cemetery Reserve in the earliest parish plans issued.

The position, however, was evidently not considered a suitable one, and the ground was never used for the purpose intended. Endeavours were made to have it altered, and on September 3rd, 1872, the present site at the Bluff was substituted for it, and was temporarily reserved as a cemetery, and this reservation was afterwards made permanent.

So far as my information goes, it was almost immediately after-wards used for burials, and all interments subsequent to the above date, took place there. Prior to that time the ground near the creek, within the present station yard, had been used for burials. The first interment, so far as my evidence goes, took place in 1866. The last would be in 1872, or at the latest 1873. This ground would, therefore, have been used as a cemetery for about seven years, but as the population was small, the deaths during that period would probably not exceed a dozen. Amongst those who are buried there was Mr Kinden, who was the owner of the Tyers Run—afterwards White's— and who was accidentally drowned while crossing the river. Other deaths which took place have already been referred to in your article.

No appointment of Trustees to the new cemetery apparently took place until 1877, when Messrs Peterkin, Phillips, Mapleson, Horne and Walsh were appointed, and regulations gazetted. At that time there was no direct road to the cemetery, and the only way of getting there was to follow the Traralgon West Road as far as Mrs Wade's, and then return past Mr Copeland's property. The first business of the Trustees was to try and improve this. Traralgon was then one of the ridings of the Rosedale Shire, and Messrs D. Campbell, R. Mill and H. Breed were then sitting councillors. At the August meeting of the Rosedale Council, in 1877, a letter was received from Mr C. Phillips, on behalf of the Trustees, asking for a more direct road to the cemetery. It was therefore agreed that negotiations should be entered into with Messrs Campbell and Copeland, the owners of the intervening land—to obtain the road required. These negotiations proceeded very slowly, and had not attained finality, when, in 1879, they were brought to a summary close by the severance of Traralgon from Rosedale. The Traralgon Council, however, took the matter up, being urged thereto not only by the Cemetery Trustees, but by the residents of Tyers, who wanted not only a direct road, but also a bridge over the river. It was not until 1881 that the road question was finally settled, the council then agreeing to pay Mr Campbell £15, and Mr Copeland pro. rata for the land taken from them. Mr Campbell, Shire Engineer, in company with Mr Thomson, District Surveyor, then decided the position of the road, which was at once made available for traffic. The Tyers people got their bridges in the following year.

The first burial at The Bluff was Matilda Gardner in 1869. Read her story on our Personal Story page.

Take a Historical Walk of the cemetery and visit WWI graves.