Buried in the Old Bluff Cemetery, an historical area of the Gippsland. Located in site NSM-C051 marked by a traditional headstone and surrounded with a dainty iron fence.

Thomas’s wife Kate Copeland was interred in the Bluff cemetery after her death on the 7th of November 1891. The funeral was a lengthy one consisting Mr Thomas Copeland and their nine children and many family supporters. The death was unexpected as Mrs Kate Copeland was in good spirit and health just prior. Mr James Thompson carried out the funeral arrangements with the minister being Rev. JG Wilson. 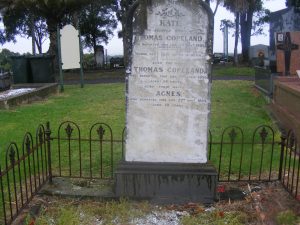 Following Kate’s death was that of daughter Agnes in November 1893 and soon to follow was the death of Thomas Copeland who meet by accident in April 1895. He was clearing land.

The article read as follows:

Throughout the whole of the Traralgon district a thrill of sorrow was felt on Friday last, when it became known that Mr Thomas Copeland, one of the oldest settlers on the Bluff, had been accidentally killed. A little before 9 o’clock on the morning in question Mr Copeland, with one of his sons, was engaged in clearing and burning off, and just before the accident happened had attached two horses to a huge limb, with the object of hauling it to a pile for burning. The main limb was about 40 feet long, and projecting from this was a smaller branch about 15 feet in length. As the horses moved forward this branch toppled over and crashed the unfortunate man to the ground. His son saw the limb going, and called to his father to ” look out,” but before he could even turn round he was stricken with death. The horrified young man rushed to his father’s side, and had some difficulty in removing the log from his head, when he found a terrible gash in the back of his skull, from which the blood was flowing in a livid stream. Mr Wade, of the adjoining farm, on being apprised of the accident, hastened to the scene, and subsequently rode into Traralgon for Dr Horne. Medical skill however, was of no avail, and Mr Copeland died about two hours and a half after the accident without regaining consciousness. Mr Copeland was born in Belfast, Ireland, and at the time of his death was 66 years of age. He originally came to Victoria about 27 years ago, and remained in the North-Eastern district for about seven years, when, attracted by the reports as to the richness of the Gippsland country, he came over here, and fortunate in securing a slice of the Traralgon runs, and one of the finest sites along the Bluff bank. The deceased was known to pretty well everyone throughout the entire district, by each and all of whom he was thoroughly respected. Mrs Copeland, by whom he had nine children, eight of whom survive, predeceased her husband by about three years. We are informed that Mr Copeland was possessed of considerable property apart from the Bluff holding, consequently those left behind will be fairly well off as far as this world’s comforts are concerned.

The article read on:

A magisterial inquiry was subsequently held by Mr H. C. Jones, J.P., when the following evidence was elicited: — Isaac Copeland, a son of the deceased, deposed that at about a quarter to 9 o’clock on the morning of Friday, 16th April, he was working with his father in one of his paddocks at Traralgon West clearing, hauling, and burning off. Two horses were attached to a limb of a tree, about 40 feet long, for the purpose of hauling it to a pile of timber to be burnt. On the limb was a branch about 15 feet long, and when the horses pulled the limb balanced on this branch, the end of which would be about 20 feet from the ground. His father was attending to the horses, and as they moved the log rolled over and struck him on the back of the head, knocking him down instantly. Witness ran to him and lifted the end of the limb off his head, and in doing so perceived a severe wound in the back of his head. Deceased did not speak after being struck down. Witness ran home, about a quarter of a mile, and informed his sister of the accident (at this time Mrs Copeland was deceased and the sister was the “carer” of the home), next getting horse and riding over to a neighbour, Mr. Wade, for assistance, When the limb was balanced in the air witness noticed that his father was facing the horses, with his back to the limb, and so could not see the way the limb was falling. As it was turning witness saw his father was in danger, and called out to him to get out of the road, but before he could look round the limb had struck him, and knocked him on his face on the ground.

William Wade deposed that his property adjoined that of the deceased, and from his house to the place where the accident happened was about half a mile. On the morning of the accident witness was working in his own paddock, and the previous witness called out. He did not take much notice of this at the time, but when he saw young Copeland riding over he hurried to the paddock where the deceased had been working. When witness reached the spot where deceased was lying there was no one about, and he knelt down trying to hear him speak. Deceased was unconscious, and witness noticed a bad wound in the back of his head from which the blood was flowing freely, while his limbs were shaking. Witness hurried into Traralgon for a doctor, and afterwards remained with the injured man until he died, at about half-past 11 o’clock. Witness had known deceased for about 25 years.

A verdict was returned that the deceased came by his death by being accidentally struck by the limb. The remains were laid by the side of his wife in the Traralgon Cemetery on Saturday-afternoon, and although the notice was so short, and the day generally an inconvenient one, a very large number of friends assembled to pay their last tribute of respect. The Rev J. G. Wilson conducted the service at the grave, and the funeral arrangements were in the hands of Mr Jas. Thompson, of Traralgon.