Buried in the Old Bluff Cemetery- Pioneers of Traralgon, the second Campbell family in the district- site OP-D022

The Campbell family were celebrated pioneers of Traralgon. Dugald has the sad honour of being the owner of the oldest deed that is held at Gippsland Memorial Park. 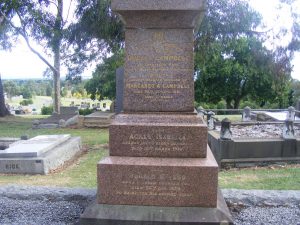 “The remains of the late Mr. Dugald Campbell were interred in the Bluff cemetery on Tuesday afternoon, and a more disagreeable day could hardly, be imagined. A strong gale blew, bringing with it, clouds of dust, which enveloped the people following the hearse, filling their eyes, ears and every part, with sand. At times this was so bad that the horses in the vehicles could scarcely be seen. Not with-standing all this the funeral cortege was perhaps the longest ever seen in Traralgon, extending from the gate of Traralgon Park-to the brow of the hill opposite the residence of Mrs. Roberts. There were 52 vehicles, and about 80 horsemen, representatives of every portion of the district and other parts of Gippsland, all testifying by their presence the esteem and respect in which the late Mr. Campbell was held. On the coffin being placed inside the hearse were the following gentlemen representing the Shire Council and the Agricultural Society, taking their places on each side of the Hearse, and acted as pall

On arrival at the cemetery, the hearse and the vehicle containing the relatives were only allowed to enter, the gentlemen before named ranging alongside, and a large procession following. The coffin was then lowered on to the grave, which is just behind that of his brother, Mr. Nicol Campbell, when it was seen to be covered with floral wreathe and designs, tokens of love from some of the deceased’s many friends. The coffin bore the usual plate, showing that Mr. Campbell was only 51 years of age at the time of his death. The Rev.  J. G. Wilson read the burial service, and at its close offered up a prayer. The body was then lowered into the grave, and thus closes the earthly career of one who was not only well known, but equally well respected: A large-hearted man, whose place in Traralgon it will be hard to fill.

As seen by the monument pictured above, Mr Campbell was a very well respected and successful family man. The headstone has etched in gold many other family members that were all pioneers of the district. This is one of the largest tombstones in the Bluff

Dougald was the grandson of James Campbell and brother of Hugh, Nicol and James. His family was a successful one that came from the Ballarat rich gold diggings. His father bought land in Gippsland as early as 1869 and Dougald, being a studious lad, became well respected as one of the first councillors of the Traralgon Shire and later became president.