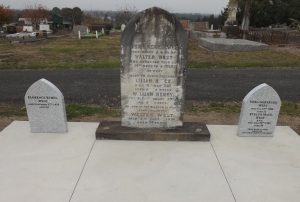 Grave locations I-D010, I-D011 and I-D012 all belong to the West family. A very influential family to the early development of Traralgon and Gippsland.

The central grave (I-D011), has the monument on it which includes Walter West, the father of the family. Walter was born in 1861 in Mortlake and came to Traralgon, setting up a blacksmith, wainwright coach building business in 1884 with a partner by the name of Mayze. He studied administration and politics and became a Councillor in 1895 until 1907, when he retired from his partnership to become Shire Secretary. He was then elected to Parliament from 1922 – 1929 as a Nationalist member. He was member of Manchester Unity of Oddfellows who started up in Traralgon in 1887. He became one of their most famous members who, after he joined in 1889 went on to become Grand Master for the State of Victoria in 1916. Mr Walter West was also responsible for writing historical reference booklet called “Early Municipal History of Traralgon” in late 1800’s. This book was reprinted in 1914 and was printed as a serialisation in the local newspaper at that same time (you may like to research it on Trove or at the Traralgon Historical society). He also contributed funds to the building of several buildings within Traralgon and was the founder of the Traralgon Mechanics Institute and executive on many local sporting bodies including football and cricket. Walter fell ill and passed away in 1934, a few months after retiring through his bad health. His wife Sarah was a great support to Walter after their marriage in 1886. Sarah Agnes (nee Bennett) died in 1908 and is buried here along with the first born children, Lillian who passed away in May 1887 aged 7 weeks and William in 1891 aged 6 days.

In grave site I-D012 is a daughter Vera, who was born deaf and had a speech defect. She died in August 1968. Also in this grave is Evelyn Maude (Eva) who was as important to Traralgon as her father. She opened many areas for women in the business field. After passing her Municipal Board Examination in 1914 and working for two other shires she became employed by the Country Roads Board and a Melbourne accounting agency. Miss West then returned to Traralgon and continued her accountancy and auditing Business (she was the first licensed woman auditor in Victoria and to be admitted into the Inc. Inst. of Accountants Victoria). She was secretary to the Water Works Trust and to the Sewerage Authority. She assisted her father as secretary in 1922 taking over from him as Shire Secretary in 1935 after his death, only retiring in 1975. Along the way Eva founded, developed and supported many organisations within the community being on the board of more than 20 associations and committees, founded a local girl guides group and was involved in education. In 1958 she was awarded an MBE (Metal of the British Empire) for service to Traralgon. She was the last of the family to pass away and did so in June 1969.  Her achievements live on in the National Women’s Hall of Fame.

Buried in grave I-D010 is another daughter, Florence Ethel, known as Ethel, who was a trained nurse who came home to run the household, nurse her ill father and take care of her hearing affected sister Vera to allow Eva to continue her community works. The three sisters (Vera, Eva and Ethel) lived a humble life and shared a small weatherboard home in Traralgon. None were ever married and no children ever carried the West name into the future.

The West family was known for their community support and compassion and benevolence and cannot be forgotten.

In 2018, funds were given to the Traralgon Cemetery Trust, to renovate the grave location for the West family. Much research was done to find the closest relatives to this family to obtain permission to restore the grave, where two new small headstones were installed as part of the grave restoration.  The original headstone remains in place, with the two small headstones placed either side.