This is the sad story of a young lad named Adam William Leslie who at just shy of 13 years of age died from drowning whilst helping his family.

Adam has the sad honour of having the oldest legible wooden headstone in the Traralgon Cemetery as at October 2016.

The Headstone reads the verse:

“Suddenly Just in a moment

The Lord of life did come

And lifted me out of the cloudland

Into the light of home” 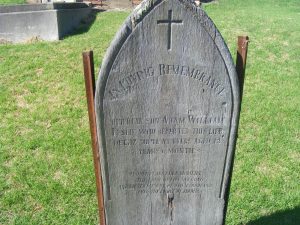 “MAGISTERIAL INQUIRY. On Saturday last a lad named A. W. Leslie, residing at Tyers, met with his death through drowning. On Monday a magisterial inquiry was held before Mr H. C. Jones, J.P., when the following evidence was given: Catherine Leslie deposed the deceased, Adam William Leslie, was her son, and resided with her at Tyers. He would be 13 years old on the 16th May next. On Saturday morning, about 11 o’clock, he left the house with a gun and went to shoot ducks and bring home a tame duck belonging to witness. Between 12 and 1 o’clock witness’ daughter ran to the house and said she thought Willie was drowned in Lamb’s waterhole. Ran down to the hole, and saw the body of deceased lying on the bank. The lad appeared to be dead. There were present Mrs Lamb, Thomas Lamb, Albert Paulett, Mr O’Leary, and four of Mrs Lamb’s children. Every means possible were tried to restore animation, but without avail. Dr Horne was then sent for. Could not say whether deceased could swim or not.

Margaret Jane Leslie, sister of deceased, said that before dinner she went to Lamb’s waterhole with her brother. He had with him a gun, powder, shot, and caps. He was going to shoot wild duck and bring home a tame duck. He tried to get the tame one out of the hole by throwing stones at it, but did not succeed. He then took off his clothes and went into the water for it. He swam into the middle of the hole, and then called out to his brother Tommy to help him. Tom’s age was about eight years. Tom went into the water and caught hold of the deceased’s hand. Witness caught hold of a tussock of grass with one hand, and got hold of Tom’s hand with the other. Deceased seemed to let go of Tom’s hand and sank in the water. Did not see him rise again. Tom could only swim a little. Witness then ran to Mrs. Lamb’s house, which is about a quarter of a mile from the waterhole, and saw Mrs. Lamb, Alf. Paulett and Tom Lamb. Asked them to go down to the waterhole and get Willie out. They all went down to the hole, and Alf Paulet went in and dived for the body, and she ran home to tell her mother.

Dr. Horne deposed to being called out, and saw the body of deceased, who had been dead about two hours. Examined the body and could find no marks of violence. The cause of death was asphyscia (asphyxia) from drowning.

Albert Paulet, selector, deposed to being asked by deceased’s sister to get deceased out. When witness got to the waterhole some children pointed out where deceased body was supposed to be. On the way down witness had taken off his coat and vest, and at once jumped into the hole, but could not find the body. Came out to get breath, and told Tom Lamb to get a rope and rake. While Lamb was away, went into the hole again and searched for the body, and found it in about 8 feet of water. Brought the body to the bank, and commenced to use every means to restore animation. Kept trying for fully two hours, then gave up, and placed the body in a trap and brought it to his parent’s residence.

The article read on:  The verdict returned was that deceased, A. W. Leslie, died at Tyers on the I2th instance from asphyscia (asphyxia), caused by being accidently drowned in a water hole on the property of Mrs. Lamb.

A tragic tale by all accounts. The cemetery holds no copy of a deed for this little lad and fortunately his headstone was not burnt during the many fires that have ravaged the cemetery. He is buried facing Tyers on the Northern side of the Old Bluff Cemetery