Said to be buried in the Old Bluff Cemetery – Believed to be the first headstone erected in the original Bluff Cemetery location all those years ago.  Sadly, marking the grave of a young pioneer and his mother, who battled the hardships of mid-nineteenth century Gippsland. 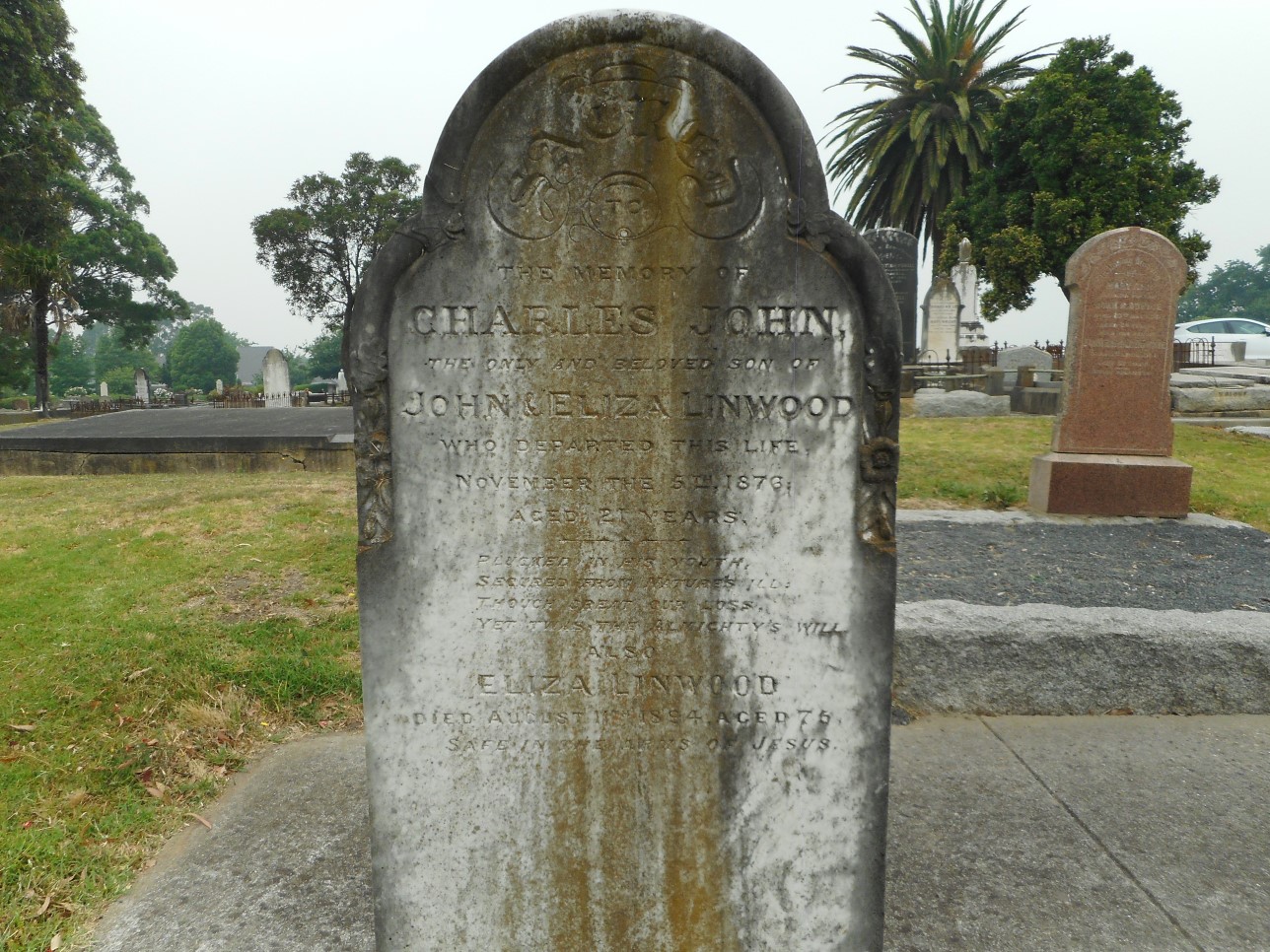 This is thought to be Traralgon’s first tombstone that of Charles John Linwood aged 21, who died 5th November 1876.  He died at Loy Yang from an unknown disease (possibly TB).  His family was typical of the early pioneers in that they partook in the Australian gold rush, eager to make their riches. Bendigo, Beechworth and Ballarat were the three main well known gold diggings in Victoria in the 1850’s. Like many others the Linwood family sought gold near Ballarat. Charles was born in Ballarat in 1855. Not much is known of the personal experience of this young fellow during his young days but is can be presumed that his was a life was full of exciting exploration. Australia was in the grips of the gold rush and many towns consisted of temporary tents and tin huts with few services, dimly lit at night by candles and kerosene lanterns. There was a lot for little boys to do around the camps, from work to fun.

In 1872 at the age of 17 Charles left Burrumbeet (near Ballarat) with his parents, John and Eliza Linwood.  They went to Port Albert by boat and then sailed the coast further on to Sale. They continued overland to Loy yang. This track being the most common route open to access Gippsland at the time.  Their first bed on arrival was a sheet of bark in a bark hut with a roof tied on with greenhide.  There was not a fence in those days between Traralgon and Flynn’s Creek. It was virgin land open up in small parcels to the settlers by the many Government Acts. Coal was discovered on the Latrobe river by Henry Goodridge two years after the arrival of Charles and his parents in 1872.

Conditions were harsh and many people suffered from exposure to hot and cold and to diseases as in the case of young master Linwood. Charles parents remained in the Traralgon district after the death of their much loved only son. Eliza passed away 11th of August 1894 at the home of her niece Mrs Thomas Wright after a long illness. She was soon joined by John on the 29th of June 1897. The family lay together in the burial site facing the Baw Baw Ranges. Father John Linwood’s name is not on the tombstone as is often the case of the last to pass away, leaving no one to write their name upon the memorial.

The deeds of burial held by the Cemetery only date back as far as 1892 so the cemetery hasn’t this young lad’s deed and his final resting place is not marked on the Old Bluff map. The first book of Deeds covering the first 100 burials at the Bluff is missing. Charles Linwood’s deed is in the missing book and may have shed light on the delegated number of his Old Bluff burial site, who paid for it and if there were any others interred in this place? We may never know the answers to these questions unless the deed book is found or family and friends come forward to further his story.